This project involves the landscape development of a 3.2 hectares property. The site will have three buildings built: a Wellness Center, an Adult Living Facility and a private residence.

The site is set in the Oak Ridge Moraine and there has been a lot of resistance to the project by the community because of the scale of the project.

The site is fairly open with perennial, grasses and shrubs covering much of the area. The land slopes down to the north and in some areas is fairly steep. 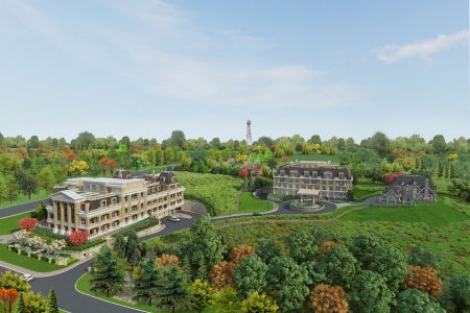 From a design perspective the project has had a big challenge: the limited area of land disturbance allowed by the OMB (Ontario Munipal Board) decision. “Ideally I would have liked to have taken more land to ease the steepness of the slopes and cut back on the retaining wall created by the building siting and I would have created a water body. But there was no vision of landscape treatment at the time of the OMB hearing and I was not involved with the project until after the OMB decision when the area of land disturbance was established. I do not know if I would have been able to have changed the Board’s mind, but I would have liked to have given it a try*. The retaining walls are not the best solution in providing for the integrity of the Moraine.”

The timing of the project to establish the landscape treatment of the areas disturbed by the construction of the buildings and infrastructure will be important to address any erosion issues. A variety of seed mixes are proposed to bring about the establishments of different landscape from meadow, lawn to woodland establishment. Erosion control growth blankets will be used on slopes steeper than 3:1. A number of seed mixes are proposed, due to the different conditions and situations on the site. To create privacy/screeing, a wide tree buffer of mostly coniferous trees were used and placed around the site. Native plant material was used as much as possible to keep in balance the site being within Oak Ridge Moraine. Also, importantly, was siting decidious trees and coniferous trees to provide for the best energy sufficient senerio for the building. That is siting deciduous trees to the south and south west shading the buildings during the summer months and then in the winter months allowing the sun through.

The project has just been submitted for Site Plan Application.

*Judith was involved in a project in England with the company she worked for there. A road was being proposed through a valley near the white cliffs of Dover. The engineering solution created steep slopes and the land remained in the Department of Transportation hands. “We were successful in requesting more lands be acquired so we could reshape the valley so the road looked like it followed the curve of the valley rather than carve through it. Also, by doing this more land was returned to the original owner as we removed the steep slopes. We also screened the road from some of the Right of Way footpaths that went through the area”.